Edit
watch 01:36
We're Getting Mutants in the MCU - The Loop
Do you like this video?
Play Sound

Kingdom of the Rift

Elane Haven is a shadow and the lover of Evangeline Samos.

Elane was House Haven's candidate in the Queenstrial, but lost to Evangeline Samos.

Later, in Training, when Rane Arven asked who was most likely to win the fight between Maven and Tirana Osanos, Elane deemed Tirana as the more likely winner, because she had elemental advantage and was more experienced. Tirana won the fight, proving Elane right.

It is revealed that Elane and Evangeline are lovers. Elane, Evangeline, and Ptolemus Samos decide that it is for the best for Elane to marry Ptolemus so that Evangeline and Elane can stay close to each other.

Elane is still in a relationship with Evangeline and spends time with her. Later it is revealed that she was forced by Larentia to sleep with her husband, Ptolemus, to give heirs to House Samos. Elane later escapes with Evangeline to find a new life in Montfort, where she and Evangeline are free to have a public romantic relationship.

Elane is kind and sometimes shy and quiet. She doesn't contradict orders from Evangeline's parents and she is very elegant and ladylike. She appears to be a pure-hearted and loving person. Elane is also shown to be cunning and intelligent when she skillfully uses her powers of stealth to help Evangeline spy on political opponents. Evangeline describes her as being talented, but not a warrior.

She is pale with glossy red curls. She is described as beautiful and perfect by both Mare and Evangeline. She has light skin, which she lets glow with her ability, and beautiful dark eyes. 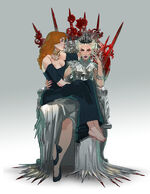 Elane and Evangeline are lovers. Evangeline originally planned to make Elane her consort after her marriage to Cal. However, when Elara Merandus and Maven Calore take the throne and Cal is cast out as a traitor and murderer of his father, King Tiberias Calore VI, her plans are forced to change. While she is engaged to marry Maven, she and Elane continue their relationship behind closed doors. As part of the alliance between Norta and the Rift, Evangeline is once again betrothed to Cal, which breaks her heart. Elane tells Evangeline that she cannot live how they are anymore. Elane and Evangeline run away to Montfort with Ptolemus and Wren where they are finally free to be together.