"Now is the right of Queenstrial, to bring forth the most talented daughter to wed the most noble son. In this we find strength, to bind the High Houses, and power, to ensure Silver rule until the end of days, to defeat our enemies, on the borders, and within them"Tiberias Calore VI in Red Queen

Queenstrial is a competition between eligible daughters of the High Houses designed to show which daughter is the most powerful and thus can produce the strongest heirs. Each girl demonstrates her ability in an arena guarded by an electric shield. The winner weds the prince or king for whom the Queenstrial was formed. 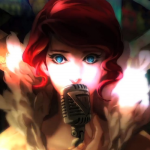